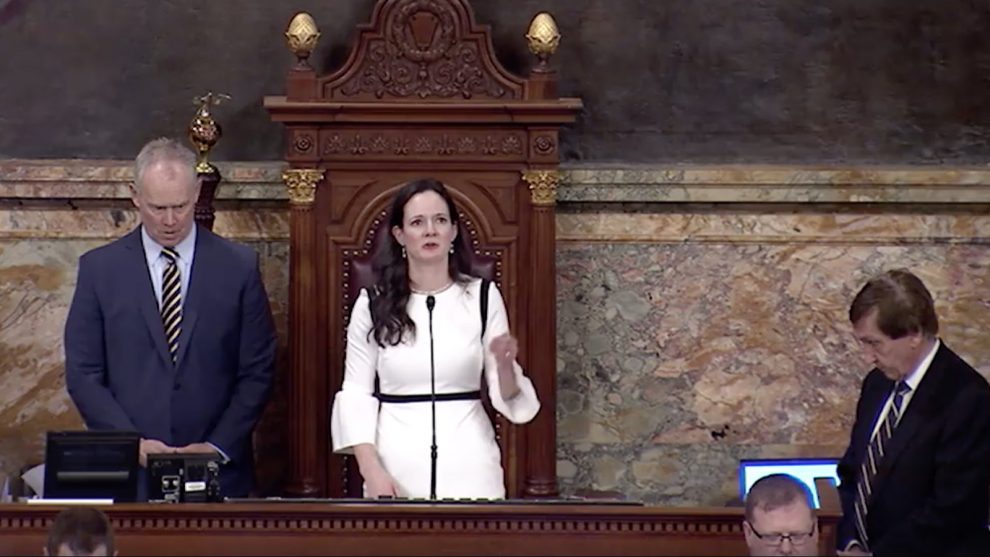 (RNS) — A prayer that mentioned Jesus 13 times in less than two minutes has sparked heated debate among Pennsylvania lawmakers and a wider discussion about how sectarian prayer and respect for religious diversity can co-exist in public life.

“Jesus, we’ve lost sight of you. We’ve forgotten you, God, in our country,” prayed Borowicz, a Clinton County Republican who represents Clinton and Centre counties. “Jesus, you are our only hope.”

The prayer mentioned President Trump, Pennsylvania Gov. Tom Wolf and Israel before closing with a reference to the New Testament verse that “every knee shall bow” at the name of Jesus.

More than a week later, controversy over the prayer shows no signs of dying. It’s a reminder of the challenge of navigating public prayer and the separation of church and state in a society that is increasingly pluralistic.

A former teacher, Borowicz, who is married to a pastor, ran as a Christian conservative and made many biblical references in her 2018 campaign, according to published reports. Borowicz also founded Make a Stand USA, a nonprofit whose goal was “to hold prayer rallies in each state, bringing the country back to God,” she told a Pennsylvania newspaper.

Multiple calls to Borowicz’s offices over the course of several days were not returned.

Her prayer may have run afoul of House guidelines.

“We believe we addressed the matter Monday afternoon on the House Floor when Speaker (Mike) Turzai reminded everyone that the Members of the House come from a wide variety of faiths and we believe it is important to respect this diversity,” Turzai’s office said in a statement issued in response to the controversy. “Speaker Turzai reminded the Members that our guidelines ask them to deliver an inter-faith opening prayer.”

Johnson-Harrell said she was appalled and offended by the prayer, not so much for herself as for the 55 guests who had shown up to celebrate her swearing-in. She also said that Borowicz’s remarks were more political statement than prayer.

“It was very chaotic and disrespectful,” said Johnson-Harrell. “I do not have a problem with Jesus. I understand more than many Western Muslims how important Jesus is to Islam.”

“It’s not in keeping with the spirit of what such invitations are supposed to be,” Garner said.

But in an interview with the American Pastors Network on Thursday, Borowicz defended her choice of words. “I had no idea that that would cause controversy,” she said. “It wasn’t directed at anyone.”

In a statement posted the next day on the American Pastors Network blog, Executive Director Gary Dull said that he was grateful “there is still enough respect for God and America’s great Judeo-Christian heritage for those prayers to continue to be offered in the state” and that he trusts that freedom will continue.

Ryan Travis, former communications coordinator with the Republican Caucus of the Pennsylvania House of Representatives, wrote a commentary advising Borowicz to “choose her words more carefully” in the future.

Jeffrey Trimbath, executive director of the Center for Vision and Values, a conservative think tank at Pennsylvania’s Grove City College, argued that Borowicz’s critics were being intolerant.

“Of course, they’re fine to have people pray who agree with their particular agenda,” wrote Trimbath in a commentary posted on the center’s website. “But if you have a person who displays a genuine faith in a God who makes real claims on one’s beliefs and behaviors that contradict their agenda, then that goes too far.”

Washington University law professor John Inazu, author of “Confident Pluralism,” noted that the Supreme Court has approved sectarian prayers at government meetings. But he said the controversy over Borowicz’s words illustrated the problems that can accompany prayers that appear to favor one faith over another.

“The law encourages generic, nonsectarian prayer,” he said. “Many people who want to pray in public want to pray specific, nongeneric prayer.”

“Just because we have the right to say something doesn’t mean we should say it,” he said.

Diana Eck, a religious studies scholar who is director of Harvard University’s Pluralism Project, said prayer should lend gravity to the opening of a legislative session, pointing to comments made by recently retired Justice Anthony Kennedy in Greece v. Galloway, a 2014 Supreme Court decision about public prayers.

“In general, there has been a sense that what legislative prayer should amount to is something that is broadly inclusive, because it is prayer for the whole body,” Eck said. “It’s simply inappropriate to have a prayer so exclusive in its religious tenor and one that mixed in political concerns. That clearly crossed a line.”

The invocation sparked outrage and accusations of Islamophobia and intolerance from some legislators, including Philadelphia’s Kevin Boyle, who has sponsored a resolution mandating that prayers be constructed to be inclusive of all religions.

This isn’t the first time prayer has been a focus of contention in the Pennsylvania House.

In 2016, atheists and other freethinkers barred from acting as guest chaplains sued the Pennsylvania House leadership, claiming that the legislators were violating the establishment clause of the U.S. Constitution. A federal judge ruled in favor of the nontheists. Republicans have appealed the decision.

Until that issue is resolved, Pennsylvania legislators are tasked with giving the opening invocation.

Johnson-Harrell said she hopes lawmakers will be able to focus on the matters of governing — not arguing about religion.

“Republicans and Democrats will always be in fights over something,” she said. “Prayer should not be one of those things.”